Ahoy there me hardies

Well shiver me timbers, a bunch of skallywags told me today that if I learned to talk like them, I could be a pirate too. Bekah's class attended the musical version of "How I Became A Pirate" today. It was held in an ornate theater in P-town. D-behaved (mostly due to the strep throat Bekah is getting over so her numbers might have been on the low side but throw in that illness and numbers were a little above the range I like to see). All in all we had a great time! David got to spend the afternoon with grandma and grandpa (my parents). They don't often get to watch him because they both work. Mom is gearing up for retirement and taking more days off and Dad is suffering from a pain in the neck (not me) and waiting for surgery so he was home and happy to bide his time with his grandson.

Here are some pictures of the trip... 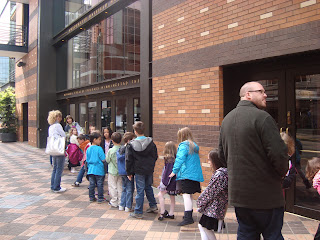 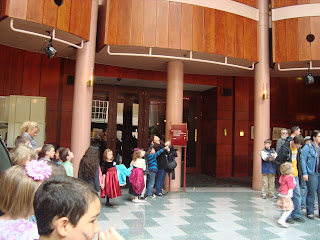 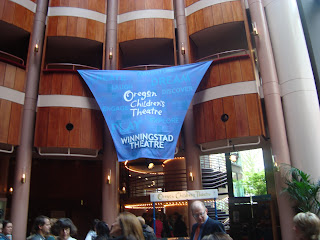 It has been a while since my last post so I have a few things to update.  Bekah's ears got re-examined and she was able to see the audiologist.  The audiologist checked to make sure her ears were indeed healthy and not full of wax, then tested to make sure there was no hidden fluid in there.  Bekah then went in to a sound proof booth and her hearing was tested.  She passed!  The only sound she couldn't hear was the lowest tone and that should not have an affect on her learning and gives us a base line if her hearing seem to get worse.

David is on the fast track to potty training.  I really wanted to wait until summer to push the potty training.  I hate potty training!  If I could give my kids to someone else for a season that would be the one I would pick.  Bekah was easy peasy but everything with Bekah has been easy peasy (except that she is my D kiddo).  Josh and I went round and round and I thought I was going to have him graduating high school in diapers or lose my sanity or both.  I made every mistake in the book.  I screamed and yelled a little more than I am proud to say.  With the girls I just let it go until they took the lead.  I was planning on that with David.  He took an interest at about 16 month old.  1 year olds pee too much for me to have the desire to go completely diaper free at that point.  He has peed and pooped in the toilet many times, sometimes many times in one day but I had not bought any unders for him.  He got some money for Easter and I went out and bought some unders with his Easter money.  I counted our diaper stash on Wed and was down to 10 and really didn't have the money to go buy more.  So out came the "underwears" on Thursday.  He did fabulous!  Only a couple of dribbles in the unders and then when he got tired one pee and that was on the kitchen floor so it was easy to clean up.  He "made snakes" (poop) in the toilet and got lots of little prizes (candy from my low stash) for listening to his body and doing his business in the toilet.  When I told him not to poop in his underwear, he said "that would be disgusting!"  (keeping my fingers crossed that he doesn't try it) Today becuase he was at my parents house I put him in diapers so they didn't have to deal with the messes.  Tomorrow the unders will be back on his little hiny.  I'm not sure I am ready for him to be growing up so darn fast!

The puppy needs to learn a thing or two from David.  She has not once pooped in the house but every time I take her out of her crate, she pees on me.  I think it has to do with a tiny bladder and submissive peeing so I am using a towel to grab her or opening her crate door and calling her over to the door (she is in too much of a hurry to squat on the carpet).  She will be going to puppy kindergarten soon so I am hoping we can work it out with the trainer then.  Josh is still doing amazing with her.  I need to get some new pictures becuase she is growing, fast!

Endo appt is next week.  This one is not going to be fun.  Ear infection followed by strep throat less than two weeks later.  We have been cranking that temp basal but still having numbers in the 3 and sometimes 4 hundreds.  I didn't like the A1C of 7.2%  last time but I think that would be beautiful this time.  Oh well, I can honestly say I have done my best.  The other night Bekah's BG went down to 104 and I sat up checking every half and hour to make sure she didn't crash but wanted so badly, especially being that she is sick, for her BG to hang out there for a while.  It stayed between 104 and 108 for a few hours and then went up to 112 and I decided to catch some sleep.  An hour and a half later it was back up to 210.  For a little while I have to hope that a lot of healing was taking place as her body was not having to fight HBG along with the infection.  You win some, you loose some and this A1C probably won't be her best but Tuesday we get to wipe the slate clean (sort of) and hopefully spring will finally come and we can be out doors more and more active to keep those numbers in a healthy range.