I have four kids and you hear about 1 of them a lot because my thoughts are usually consumed with her and her numbers.  I do add David in from time to time because he is with me 24/7 and sometimes his antics just have to be shared.  I do struggle with the guilt of not giving my all to each of my kids so today I decided to tell you about my second born, my oldest daughter, Megan.

Each one of my children is incredibly unique.  I am so blessed to have been given the charge of raising these precious people and getting to experience daily life with them.  Some days are a challenge, no doubt, but the joy they bring me far out weighs the frustrations.    So with out further ado, meet Magnificent Megan! 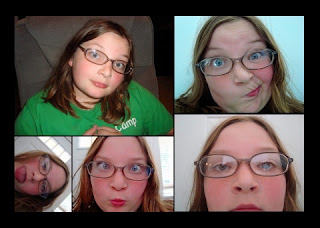 Megan is 12 and is the definition of tween.  She seems to bounce between being a child and an adult wanna be on sometimes an hourly basis.  One morning she'll come down with her hair straitened, donning makeup and a stylish outfit and the next she'll come bouncing in with pig tails in her hair, no make up and chattering about her silly bandz.

Megan loves to read, she just started the third book in the "Hunger Games" trilogy.  She loves the "Twilight" series as well and I think has read each of the four books at least a dozen times.  She spends quite a bit of time at our local library and her room is filled with books galore.

Megan has a flare for the dramatic (what tween doesn't).  She joined the drama club at her school this fall and is preparing for her first audition.  She is also in choir so when in the mood her vocals can be heard resounding through out the house.  Megan also chose dance as her PE option this school year.  We get to watch a lot of  "shows" where she will perform the latest jig or tune.

Megan is also a great helper.  David has, from birth had a bond with her.  When he is upset, other than I, she is the only one who can console him most times.  When I have to be otherwise occupied with D care especially giving an injection or doing a site change, Megan is great to keep David distracted.  He loves his "Naynay"!

Megan is the antithesis of Bekah.  Where Bekah is shy and quiet, Megan is loud and outgoing.  Bekah tends to clam up and not want to talk about stuff especially when it comes to her health or D care, where Megan has to share every detail and wants to talk through every procedure that she may have to go through.  Bekah likes her clothes to match where Megan tends to have a more "artsy", way of dressing and could care less if purple stripes and orange polka dots don't go together if that is what she feels like wearing.  Where Bekah would rather fade into the background, Megan loves to be the center of attention.

Last spring, Megan had some tummy trouble that I took her to the doctor for.  Blood test revealed elevated liver enzymes.  After a retest and seeing a specialist, it was determined that Megan might have fatty liver.  She has done so great to pay closer attention to what she is eating and drinking and get some more exercise.  Our scale reflects that she has lost 20 lbs.  (we have been in this weight loss journey together)  I assumed she was just chubby and needed to grow in to her weight.  I was chubby as a kid and once I had a preteen growth spurt was "normal".  I am so proud of her efforts to get healthy!  She seems to have a great attitude about the whole thing as well.  I worry because I know how fragile the female preteen psyche can be especially where it comes to body image so I have tried to be as positive and encouraging as possible in her journey to get her liver healthy.

Megan is a great big sister and is Bekah's champion.  She sticks up for her when the bratty neighborhood kids are eating dramatically (they know she can't always have what they are having and one in particular is just a brat about the whole thing) in front of her or asking questions that Bekah doesn't feel like answering.  She holds her hand when, Bekah doesn't feel like being brave and Megan has even given Bekah an injection.  Megan cheers on her sister as she reaches new mile stones in her self care (checking her BG level on her own, giving her self shots etc).  Megan has been very compliant to take the back seat for a season while we all get used to this, albeit unwelcome, new house guest called diabetes.

As I looked back over some of my older posts, I realized that I had done a couple on Megan so you can go here or here to read more about this magnificent girl.