Joshua - the brave and noble one

I chose to try to write a little about each of my children this week.  You may hear mere mentions of them but I have have not officially introduced you to them all.

Today, is Joshua's day.  Joshua is my oldest child.  He is the one who gave me my first badge of honor and helped me enter the club called motherhood.  Joshua has been my pioneer, teaching me how to be a mom.  He has helped me through trial and error (lots of error) when to be soft and when to be firm; when grace is appropriate and when boundaries need to stand strong. 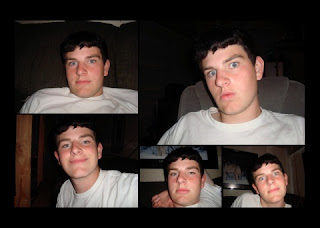 Joshua is 15, soon to be 16.  He recently got his permit and is now driving. This is a scary season, a season of release for me.  A time when I have to trust that each time he gets behind the wheel that he will make wise choices and be ok.  A time when I find myself praying protection over him more than ever.

You don't hear much about Joshua because he doesn't "need" me as much as the other kids do.  He is pretty self sufficient and is in a season where his needs for parental stuff are met mostly by his dad.  There comes a time when the male roll model is strongest in a child's life.  Josh has always had a strong bond with his dad.  Even as a baby, where the other three only wanted me, Josh would be just as happy with Jason.

As I write this, I am trying to be ever so careful about what I write because I don't want to embarrass him. he does have his "teenage" moments but over all I am proud of the man he is becoming.

Josh is a great big brother and has a pretty tight bond with Bekah.  He was very concerned when she first got her pump that he wouldn't be able to rough house with her for fear it would get knocked off.  The kids all like to play rough and tumble games with Josh and their dad.  These big guys are like human jungle gyms for Bekah and David especially.

Joshua is a gamer.  Video games are his thing.  He has never really been into any sports or instruments.  Video games are what has stuck with him.  That and jump-style dancing.  He is pretty good (I am slightly biased though).  He also has a thing for mid-evil stories (books, movies and television shows based on mid-evil themes), hence the title of this blog.

Josh stands at about 6' tall.  It is a very surreal day when you have to look up to see your child's face.  Josh is kind and sensitive.  He is fun to be around as he takes life fairly casually.  He posses the qualities of a great leader as he is confident to take charge of many different situations.  He sees the big picture and doesn't get caught up in the mundane details.

Joshua is a great kid and I am proud that he is mine.  Thank-you Lord for the amazing blessing that he is!