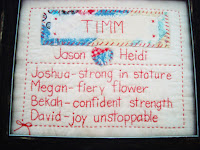 You hear about little David often and I decided to update you on him today.  What is going on in the toddler's life these days?  Other than growing like a weed and going from baby to little boy practically overnight, he has been keeping us busy with his toddler antics.

David turned one just a few weeks before Bekah was dx with T1D.  He has sacrificed so much with out even really realizing it over the last seven months.  From having to give up mommy while Bekah was in the hospital, to giving up nap times so we can be at school to help with Bekah's care.  Usually I believe in a pretty regular routine for little ones so they know what to expect and that seems to lessen tantrums.  Unfortunately D doesn't work around our schedule and there are many times when I have to scoop him up from his nap to head to school.  I hate waking him or knowing he just needs to sit and nurse down to sleep but we have to be at the school.  I am hoping now with the 504 (almost-not quite signed yet) in play and her teacher being so in tune with Bekah's personality and what to do for various different BG levels that we won't have to pack up in a moments notice as much and a regular routine will be possible.

A few weeks ago, little David started signing "pee peeeee in da paa-deee, pee peeee in da paa-deee" and dancing along to it when ever anyone would head in to the bathroom.  I decided that even though my other kids were all 3 before they were potty trained (we are a little slow with that one around here) that it was time to buy a little one for David.  After training 3 kids I have decided that I really don't like potty chairs so instead of his own little chair I got a couple of seats that fit on the big one to keep him from falling in.  One for upstairs and one for down.   So far we have mostly just "practiced".  He sits there and asks for toilet paper, I give him a square and he wipes, jumps down and flushes then we repeat until he is bored.  The first couple of days we camped out in the bathroom for like a half an hour.  Now it's just 5 min here and 5 min there.  He has made a couple of pees in the toilet and one turd.  He made bank with the turd.  Candy and a prize from the prize box.

David is talking lots now.  He says the funniest things.  I need to write them down because now that I am trying to remember, I can't seem to think of one of his funny quips.  The only one I can come up with is last night I did a basal test and was sound a sleep when he woke up to nurse. (it's amazing to me how I can be wide a wake checking a blood sugar one minute and so sound a sleep the next) I woke up to him tapping me saying "Hey! Hey Mommy!  I need da milk"  Once I became coherent that made me chuckle.

I love the age that he is.  At a few months before he second birthday, he finds life fascinating.  Everything is new and fun!  He is discovering new things that he can say or do every day.  He is learning like a sponge.  Everything gets absorbed in to his little brain and who knows when it will come back out again.  Sometimes a little more than we bargained for with teenagers in the house teaching him things that babies just shouldn't know.  For instance, I think he is probably the only one year old that knows how to force a fart and thinks it's the funniest thing in the world when he is successful.  He does say excuse me but then laughs and tries it all over again.

David is not in to the tv much at all and I try to keep it off as much as possible but again a result of having teenagers in the house, he is addicted to youtube.  Being a toddler he loves to see things repeated over and over.  His favorite videos are the duck story ones and we watch them each at least twice a day as he begs "mo mo duck".  If you are unfamiliar with these, I attached them below. Be warned they are catchy and sometimes get stuck in your head.