Today I had a few moments that took my breath away and I had to fight back the tears.  The first one was watching "A Bug's Life" with the kids.  If you haven't seen it, you should, great movie.  Flick is the epitome of my husband.  Misunderstood by most of the world but has the most genuine heart to want to inspire others to greatness.  I love the movie!  As we were watching, there is a point where the box that the circus bugs hang out  (it's a box of animal crackers) gets closed.  Bekah pipes up "oh look Mommy it says 12 carbs".  Most children don't even know what a carb is.  I was so proud, yet so sad that she has been forced by D to grow up so quickly.

This afternoon we went to a grand opening at an indoor baseball arena that Bekah's best friend's dad is part owner of.  Bekah had her doll complete with an insulin pump with her.  J asked to see it.  Bekah is a bit shy and doesn't readily show off anything let alone her diabetes stuff so he had never seen a pump up close and was very curious about the doll's pump.  As J was playing with the doll and pump I over heard him say "oh no it's giving her too much insulin" he proceeded to, in 7 year old boy fashion, punch the pump.  "Ok that's better, now it's just giving her 1 unit, " he said.   He was able to act out what I have wanted to do to D since the day Bekah was dx. (punch it in the face) The doll's pump was just representing the disease in this case.  He didn't say it in so many words but I think he hates D as much as I do some days. 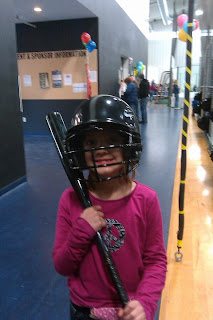 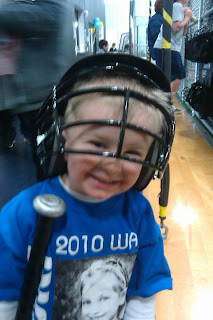 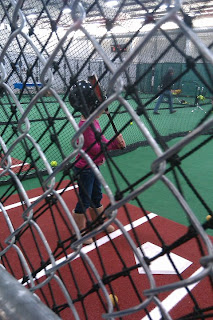 We then had a few errands to run.  We stopped at the store where I had left Bekah's D bag in the car because I keep a glucometer and candy in my purse and we were just running in real quick to get just a couple of items.  The older kids got distracted by the airsoft guns and I had to check out the purse selection because mine is getting a bit small for all of the stuff I carry in it on a regular basis.  Bekah was pushing David in the cart and looked at me with that pale face and glassy eyes that I recognize oh so well.  "Mom, I feel low".  I quickly scrambled for the glucometer in my purse and handed it to Bekah.  I took a deep breath as she was checking and I said a silent prayer of thanks that I am able keep D stuff everywhere, 'cause you never know.  The meter beeped, 55.  I dug out the four Starbursts that I had in my purse and as I handed them over to Bekah, David chimed in "I lo, I need tandy"  Oh how quickly they learn.  Luckily I had some smarties in my purse.  He was not happy that he didn't get a square one but decided the smarties would do.  I really didn't want to deal with a toddler tantrum and a low BG right in the middle of the store.  Bekah began breathing in short deep breaths, almost a moan so I escorted her over to the display couch to sit and finish her candy.  Her symptoms were getting a little more severe.  Bekah laid back on the couch and continued to moan a bit and I just held her.  I hated D at that moment.  I let the tears stream down my face, I could not hold them back any longer.  I flashed to a few of my friends who have had to use glucogon recently and cursed my self for leaving the bag in the car. I almost started shoving more sugar in Bekah's mouth but decided to see what happened in 15 min.  This was one of the most symptomatic low BGs that she has had.  It took almost the full 15 minutes for her to perk back up and begin feeling better.  The 15 minute re-check showed a 193.  I will never get the complexities of BG levels and how they can rise and fall on a dime and sometimes are so stubborn that it takes several treatments to get barely above 80.

Tonight I did a midnight BG check and got a 315 with 0.2 ketones.  I gave a correction bolus.  I'm pretty sure the HBG is from cashews.  I don't usually bolus for them but I'm thinking I might have to start.  I came up to my computer to quickly catch up on FB and blogs before entering slumber land.  The radio in my room was playing "No Matter What" by Kerrie Roberts.  It just fit where I am at today with D.  I'm so thankful for God's grace to see me through each and everyday.  Here is a youtube version of the song with the lyrics: