alas they must grow up...

Sunday, we decided to tackle taking down the Christmas decor in preparation of the reality that was looming to hit the following morning when everyone had to go back to school etc.  After the tree came down, I decided to take on the playroom and reorganize it to fit in the new toys. As I cleaned, I weeded out some of the "baby" toys.  My heart was heavy to say good bye to these things but I knew my little guy was growing up and at 22 months prefers cars to rattles.

As I was handling things in the playroom, my husband had decided to work on the garage.  (We have it carpeted and it acts as his office but had become a catch all during the holiday season.)  He asked me to come out and look at something that he needed to decided what to do with.  Several months ago a friend had given us a bed that his son had grown out of.  It was a very cool bed and we had decided to hang on to it until David was big enough for it.  We talked about continuing to store it, risking that it could get wrecked, giving it away (knowing that David would love to have it) or taking the crib down and putting it in the house.

Tears began to stream down my face.  My husband was compassionate and said it could wait.  I did not want to stomp on this incredible momentum we had going and I was already facing that the baby days were gone.  So I went upstairs and began to disassemble the bedding and the crib.  As I untied the bumper and took off the sheets I felt as if my heart was being torn apart. We didn't even use it much but, David is our last baby.  Unless God intervenes in a crazy set of circumstances, David will always be the last.  The last time a first word is said, the last time first steps are taken, the last time I will snuggle a a baby and take in that sweet smell.  While the new phases are so exciting, I can't help but feel like the end of an era is inevitable.  I remember with Josh almost pushing the next phase as I was so excited for him to reach a new mile stone.  Four children later, I have found my self slowing down and enjoying the moments more.  It seems like my younger two have been in more of a hurry to grow up.  Both walking at 10 months where the other two were 13 months.  *sigh*  Before I get too sappy and emotional, I will end this post with some pictures of the nursery before and after. 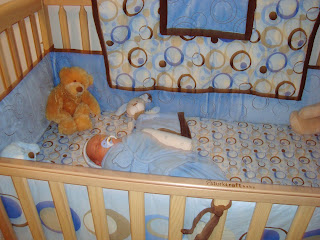 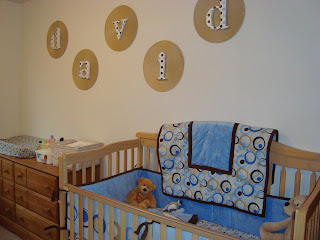 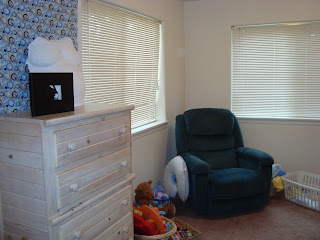 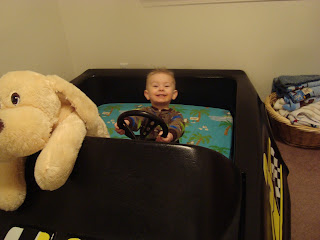 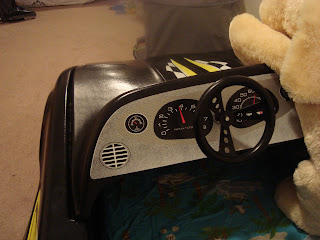 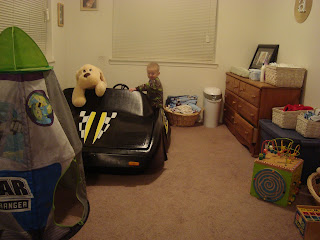 You can't see it in the picture but the lights on the bed really work.  I knew this was the best decision for David (check out his smile in the first pic of the new room) even though it left my heart aching.  Forgive the photo that is propped on the changing pad, I hadn't gotten it hung before I took the photos.
If you read my post about the "new roost"  aka the place where I get pancake ass as Reyna puts it =) that photo was taken in the same room.  (a hand me down from my in-laws and I LOVE it) 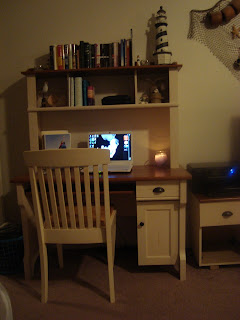 Puzzeld?
We have a giant master bed room.  The closet and the bathroom are tiny but we have lots of floor space. 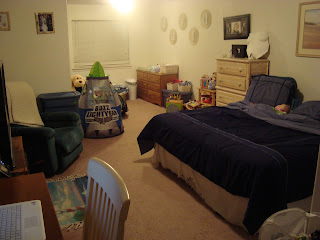 This is taken from the doorway. (yes that is David in my bed)  That is not a giant tv next to my desk (well it is but it is a broken hand me down that will cost more to fix than buy a new one, I think it's a guy thing)