A fashion show for camp...

The camp that Bekah will attend this summer, Gales Creek Camp had a fundraiser fashion show this weekend.  American Girl fashions were the product being modeled.  Friday night was rehearsal and Saturday was the show.  (and Sunday but we weren't a part of that show) We headed over to P-town to an upscale mall at 7:30AM and got home at 6:30 PM.  It was a fun filled event.  My mom had Jason drive her over because she hates Portland traffic and she bought tickets for him and which ever of our kids that wanted to go.  You'll be impressed to know that Josh was the only 16 year old boy in attendance becuase he wanted to support his sister (I love my son).  I hung out back stage (two stores down), along with David, to help Bekah and let my family watch the show.  There were actually 2 shows one at 10 AM and the other at 3 PM.  I was very impressed at how well this event went.  There were prizes and little lunches complete with cute little pink cupcakes.

I peeked my head in after escorting the girls down two stores to the stage to watch my sweet little girl, strut her stuff.  As I was standing there I saw one of the volunteers (an older camper or counselor from GCC) walk over, a little shaky to grab a drink.  I knew as I watched that she was low. She had that look and her hands were shaky.  I saw that she was a little flustered at the drink choice and then noticed that she had in her hand a light lemonade.  I walked over and quietly asked if she was low and said, "that's not going to do the trick let me go grab you a juice." (she was very thankful)  I stood at the door for a second and watched Bekah walk out on the stage and then as she got to the other side I dashed two stores down to our stuff and grabbed a juice box and then ran it back over to get that girl the boost that she needed.  Woohoo juice box to the rescue!!  (she told me, it was the one thing she had forgotten that morning but had been running high so she didn't think she would go low)

The girls didn't get to keep their clothes but did get a little prize bag that included a paper doll set.  They also did a drawing for a few items and Bekah got a couple of little t-shirts for Bitty baby.

Now here is a quick video of my sweet little bunny, strutting her stuff and a few pics of the event.

Most of the pictures, I got backstage with my camera but Jason got the video and last two shots with our camera. 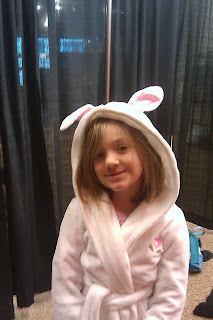 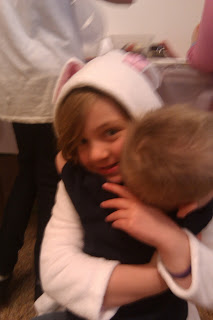 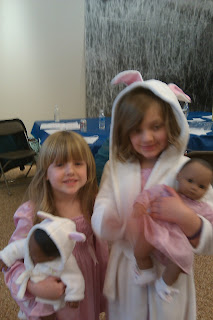 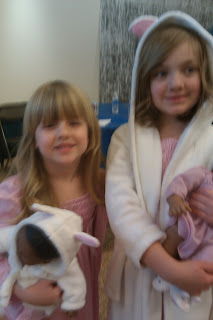 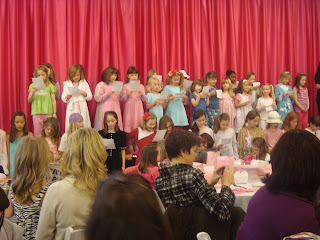