There are a few of us D-moms that have gotten together a couple times since Bekah was dx with T1. My friend, Bonnie, has a daughter who was dx with T1 5 years ago so they have met a few people over the years that have D in common. She has graciously opened up her home to us once a month or so. It has been awesome meeting these folks! She met up with another gal who does the same thing with a different group. They decided it would be cool if we all met at a park this summer. We met last week. I haven't blogged about it because I have been processing the whole thing. It was good, don't get me wrong. I always love meeting people that "get it".

It was a very hot day. Here in the PNW, we have had 60 degree and raining weather for weeks and weeks and then bam 90. I'm not complaining, but it would have been nice to get a warm up so we could acclimate. Seriously on the 4th of July I was wearing two sweatshirts and less than a week later roasting in 90 degree heat. I was not going to let the heat stop me from this outing and opportunity to meet some more people that understand my new world.

Our group was on the ground on blankets and their group was under the covered area just a little to our left. That in itself was a bit awkward because it was like them and us. I skipped over anyway and introduced myself. They were all very nice ladies with absolutely adorable children.

At one point my situation with the school came up as I was talking to one of the moms. They are all from a different school district than the one we are in. In their district, they have procedure nurses that travel and take care of their kids. Our district doesn't have that in place and in fact the nurse is only there 1 day a week.

I went back to "our" group to say some hellos and squeeze some necks of people I hadn't had a chance to touch base with. When I came back over to meet a couple of new ladies that had joined their group, I was bombarded. I know they meant well. I'm sure being on sensory over load with the heat was a big part of why I felt overwhelmed. I was being thrown "you need to threaten to sue", "you need to call the local news station", "you need to, you need to , you need to". I wanted to just melt into a puddle and cry.

I know that they had the best intentions and have been dealing with ignorance from people and having to fight for their kids for years. I get that. I have a fierce mama bear inside of me too and can go from 0 to bitch in less than 60 seconds if necessary. Maybe I am naive but I really think that I can fight this with out having to fight so to speak. I believe we can come up with a win-win situation. I will be contacting these other moms though if I need to get mean and nasty.

I am a little backwards from the rest of society. I believe that respect is not something that is earned. I believe that all people deserve honor because they are God's creation. When He was done creating them He was happy with the result. He loves them with an everlasting love and sent His son for them. So before I go putting on my bitch hat and making a spectacle of the school district I want to try to handle this with grace and honor. (I have contacted the ADA and Bekah will be on a pump so the skin piercing will not be an issue) I also want to just enjoy my summer with out worrying about the school and what the best course of action for Bekah's education is.

All in all our experience at the park was a nice time. Here is a picture of the kids and some of the moms. I think we could be great friends if we have the opportunity to meet on a regular basis. (the cutey in the blue dress is Bekah and to her right is Bonnie's daughter who has been an amazing strength for Bekah) 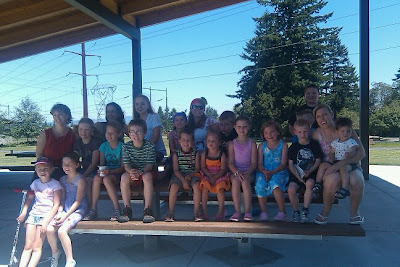