our soggy day at the zoo 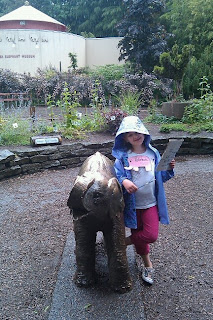 We live in the Pacific Northwest. Normally I dispute the fact that we get SO much rain as many who don't live here insist. This year though has been particularly wet and rainy. In fact in the last 40-60 days I think I can count on one hand the number of times Mr. Sun has come out to play. Bekah's kindergarten field trip to the zoo was scheduled for today. June seems like a safe month to schedule and out door field trip. The chances are probably greater than 50% that you'll get a little sun at least. Today was just as wet and soggy as a typical November day here in the PNW. Off to the zoo we went anyway. You could say we had a few extra animals at the zoo t0day because it was raining cats and dogs. (Sorry I couldn't help myself )

Bekah is normally in PM kindergarten but on field trip days all of the kids come in the morning and have lunch then return in the early afternoon before the other kids are out of school. Bekah got up early and we did a BG check. 247 hmmm, probably all of the excitement. I decided not to give an extra bolus to compensate for the HBGL. She only had eggs and cheese for breakfast (normally I would have insisted on a few carbs so she could get some insulin in her system). I drove Bekah to school and made sure all was a go and headed to the zoo.

David and I had to go separate because although I probably could have found a sitter if I would have searched, I didn't want to have to worry about how he was doing as well as worry about Bekah too. David couldn't go on the bus so I decided it would work best if I was just part of the general public that day and just meet up with the class before lunch. I love cell phones. We were able to text across the sea of children to be able to locate each other.

I had a lot of anxiety going in to the day. There was so much to think about and pack. I felt like I was taking a newborn baby on her first outing. Did I pack everything I would need taking account for Murphy as well? I felt a little like the tightrope that I have become accustomed to balancing on just got thinner and higher.

Part way through the trip the well meaning chaperon that was in charge of Bekah's group started handing out crackers to the kids. "Can Bekah have a couple?" she asked. Deep breath, "she can have some peperoni or a cheese stick". Then I look at Bekah's sunken face. "Ok she can have a couple." I replied quickly. I hated D at that moment!

For lunch we ducked into a little dry corner. Bekah's BG was 211. The other kids did not want to stay put long and we had quite a bit more to see not to mention the hike to the top of the exit, so I decided not to bolus and just wait to see where her numbers were at before getting on the bus and make a correction accordingly then. After we made our way through the rest of the animals and got to the bus her number was 192. No bolus again because I didn't know which direction that 192 was going and didn't want her to have to deal with a low on the bus. 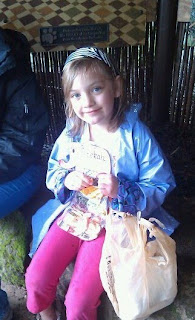 In spite of my anxiety we enjoyed our time at the zoo. David was quite a trooper in the stroller. He got a little fussy at the end so, I put him in the mai tai and sang "Going to the zoo" and "Raindrops are falling on my head" to him for the remainder of the time. He was a happy camper. Only a true NW girl would brave the day with out an umbrella. =) 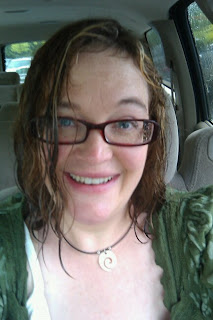 When we got home I made myself a warm cup of coffee (there is a reason we N Westerners drink so much coffee-rain), tossed the kids in a warm bath and then got them dressed in their pjs for some cuddle time. I was secretly hoping for a nap. Here is where the excitement came in. I had Bekah do a BG check before her snack. The meter greeted us. (Hi) Umm...say again? (for those of you not in the D world a greeting from your meter is NEVER a good thing) Inside I could feel my stomach trying to braid it's self but on the outside in my best poker voice I calmly said "Why don't you try washing your hands and we'll check again". #2-511, Bekah didn't like that number so #3-482, #4-509, #5-519. I put on my She-rah hat (thanks for the word picture Meri) and gave a bolus to compensate for the HBGL and the carbs in her snack. I gave her a 32 oz water bottle and told her to work on it. Try to drink at least half was my instruction. A few ketone checks through out the afternoon and evening all came back negative. 2hrs postprandial we had a 273 (whew, it's getting better) and then an hour later we had 107! Success!! (Deep breath) Put the She-rah hat back on the hook until next time.