Back to the road trip...Minnesota reunion for 4 days

Only 3 hours of driving...woohoo!!  We ended up in Osage, MN on Straight Lake where my dad grew up.  My grandma, aunt, uncles, and cousins all joined us and we packed every one in tight.  We had 3 cabins, one very large one and two tiny ones but we all seemed to have a bed to sleep on.  My dad BBQd while we were there.  Walleye, ribs, burgers and bacon.  We all pitched in to help with food prep.  It was a wonderful time!  The kids played on the play ground and in the lake and had a blast!!

This was my first time managing D on the road other than day trips.  I packed a ton of stuff too becuase you never know what is going to happen with D.  We did temp basal increases for the time in the car.  Our endo recommended for Bekah to go +110%.  I was nervous, especially with no CGM but it worked like a charm.  The challenge was then the activity once we got to the hotel with swimming and laughing with cousins we had a few lows before I had a plan.  Bekah wore her pump in the pool and the lake and I wasn't sure if she would so I had a frio pack for it to go in to keep the insulin from getting skunky.  I kept the extra insulin in a frio pack when we were on the road and put it in the fridge on the days we were at the cabin.  I had Lantus and Novolog just in case of a pump malfunction.

Minnesota was a different ball game becuase the activity was constant so we did temp basal decreases of 60% (it wouldn't let me go lower becuase her basals are tiny) and then we had to wake her up for a juice most nights on top of it all (not low but 80s).

I chose to do my best to keep D in the background.  I wanted Bekah to live and have fun and not have be the center of attention as I carefully weighed all of her food.  I swagged every meal (and did great! sorry to brag but I was pretty proud).   We just rolled with it the whole time.  I had her kit with her at all times but didn't make a big deal of it.

There was one time when Bekah was playing on a swing that hung from a tree when she hit the tree and her site pulled out.  I felt terrible for her in that moment.  The kids were all staring and worried (other than family) and wondering what was going on.  Bekah hates attention so I nonchalantly answered their questions, cleaned up the blood and mess and she put in a new site.  Then she went about her business playing.

There was one time when I thought I was going to pee my pants.  I was the only adult at the playground watching David.  Bekah's sugar stash was gone (didn't realize that) in her kit and she had a low.  All I could do was put my 9 year old niece in charge of David ( and Bekah)and run back to get some sugar.  I had to pee but didn't want to stop for that luxury (when your child is low and you gotta pee there are priorities and it doesn't matter how bad you have to go, peeing is not a priority at that momnet).  Luckily my bladder held out until Jason got back from the store to check on me.  It was close though.

While we were in Minnesota we went to a parade in Park Rapids.  My uncle has a store selling pellet stoves and he had a float in the parade.  He had restored my great grandpa's tractor and was driving that with some stoves on the back.  It was a very fun small town event on the 4th of July. 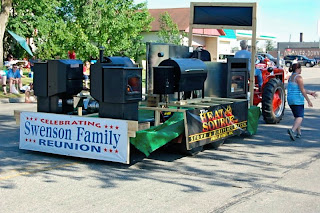