I finally got brave and headed tot he mall while Bekah was at school.  I had to get David's 2 year photos done.  It had been a year since I had studio photos taken of my little man.  Things have been going well at school, there was not a sub so I figured it would be ok.  I venture to the grocery store and to Target (our pharmacy) and even Costco but the idea of the mall with out Bekah has been ominous.  I decided it was time to cut one more string and go.  We got the photos taken.  David who is usually animated was very mellow (better than crying I guess).  As I was choosing which ones to purchase, a text comes though on my phone.  I check my phone because I wasn't sure who it  would be.  It was Bekah's teacher, her pump was alarming with a low battery.  We are still new to pumping and I wasn't sure how long I had to get to her and get it changed so we left the picture guy in a rush.  It took almost 30 minutes by the time I got David packed up and to the car and drove to the school.  By the time I got the battery changed and Bekah all set, there was not enough time to go back before school got out.  I went back the next morning to pick up the photos.  (they didn't give me a link to show you the online web versions of them so I took a picture of the one I bought with my phone)  Sorry for the horrible quality, phone pics are bad enough but a pic of a picture is even worse. 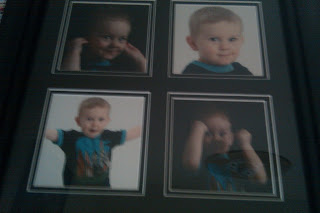 Bekah had to have her annual blood work done this week.  Megan was adamant that she go with.  Friday, Bekah's teacher was not going to be at school and the back up in the room next to her was going to be gone as well so we decided to have some girl time which included stopping by the clinic for a blood draw.  We have a favorite lab tech/phlebotomist that has done all of Megan's blood draws.  We were excited to see that Miss Penny (not her real name) was working.  Bekah cried at first becuase last year, the IVs they had to place in her dehydrated body was a bit traumatic.  Megan held her hand and once the needle was placed, the tears stopped.  As we walked out of the clinic Bekah said, "that was not that bad".  Then we went to Starbucks for a skinny caramel macchiato for me and donuts for the girls.  I'm so proud of my brave girl and Megan gets the award for being a great big sister! 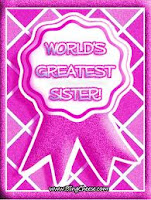 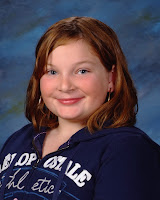